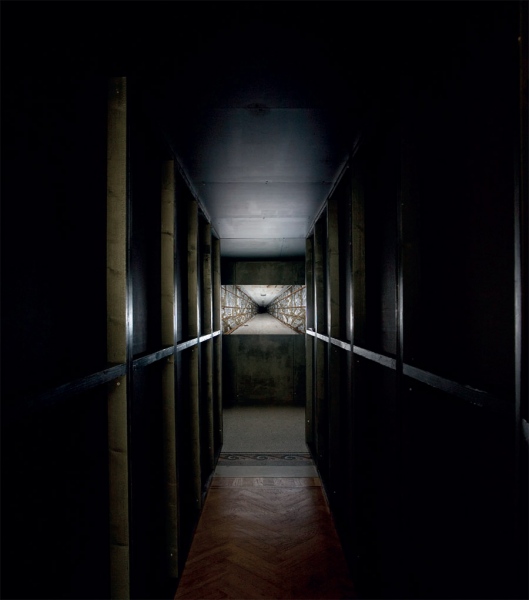 ‘Viewmaster’ is the brand name of a viewer for stereoscopic images; it was sold as a mass product together with 3D postcards. The appliance gives the viewer the odd impression of being part of the scene. Nowadays, the appliance is seen more as a toy than as an advanced system. The images of te HD movie ‘Viewmaster’ were recorded in a real building in Wünsdorf, a former Russian military base 60 km (40 miles) south of Berlin. The building is a small rotunda, built in a futuristic style; in the 1970s it was eclectically added to the classicist “Haus der Offizieren” (Officers’ House). The rotunda is found behind the House and can be entered through a long central passageway. The building only had one function: showing the fall of the Reichstag on 30 April 1945, by means of a diorama. The staging was meant to immerse the visitor in the painted battle, in combination with light and sound effects. Rubble, shells, helmets and other military flotsam were strewn over the “faux terrain” in front of the painting. ‘Watching…’ was the raison d’être of this building The diorama was a prestige project, featuring on the program of all visitors to the “Haus der Offizieren”. After the fall of the Berlin Wall. Now, the rotunda shows a dark emptiness and only reflects its own construction. Fragmentary traces remind us of the original purpose. The slideshow moves around like a roving eye scanning the emptiness in search of proof in a crime scene; ‘Viewmaster’ stages the staging mechanism. The point of view of the painting is retraces in Berlin and photographed. These round shot images are part of the movie.